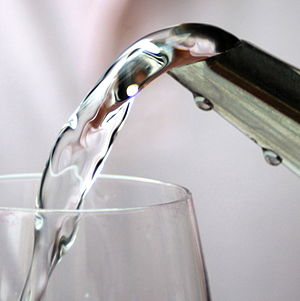 Many people believe that fluoridated water is a healthy choice for both adults and children alike. It supposedly prevents cavities, and the government even adds it to many local areas’ drinking water as a way to prevent tooth decay. However, the assumption that fluoride is a great thing to drink on a daily basis is not a good one to make. There are many hidden dangers behind this seemingly innocent chemical additive in our drinking water.

The first thing that needs to be said about the fluoride that is put into our drinking water is that it’s actually a commonly found industrial waste product. The fluoride used for this purpose is actually Hydrofluorosilicic, also known as HFSA. HFSA is too hazardous to dump, and isn’t even cleansed in order to remove arsenic or lead. HFSA raises lead levels in blood, and also raises the levels of mercury, arsenic, and chromium present in bloodstreams. According to the NSF, the most common contaminant in fluoridated water is arsenic. Do you really want to drink industrial waste?

Moreover, the main purpose that government officials supposedly use the process of water fluoridation isn’t actually scientifically proven. Higher levels of lead in the bloodstream actually were linked with a higher rate of cavities in both humans and animals. It increases infertility and genetic decay, increases the chances of hip fractures in the elderly, and even is a suspected carcinogen by many different associations. It’s also worth noting that fluoride has never been approved by the FDA, which still maintains that it isn’t necessarily safe. The bottom line is that fluoridated water is not only a bad idea, it’s downright dangerous.

In order to fully understand how dangerous fluoride is to your health, it’s a good idea to know what some of the other uses can be. Many different companies use fluoride as a rat poison, a pest extermination chemical, and as an herbicide in some cases.

Fluoride is also a carcinogen according to the EPA. The Environmental Protection Agency is in charge of deciding whether or not a chemical is toxic to the environment, and also has a say in waste disposal. The fact that fluoride isn’t considered to be safe in a natural environment is a pretty powerful statement. If it’s not safe in the groundwater, or in oceanwater, it’s not going to be safe in your drinking water. Also, the substance is so corrosive that fluoride would have to be held in a Class 1 toxic waste dump. Class 1 dumps are reserved for only the most toxic, corrosive, and environmentally dangerous chemicals.

Fluoridated water also isn’t even ethical. When the government decides to fluoridate public drinking water, it’s mass medication. Mass medication is a gross violation of human rights, and also takes away the choice that people naturally have when it comes to deciding whether or not they want to ingest this chemical. There isn’t even a reason why water should be fluoridated, since fluoride is naturally found in spinach, fish, apples, and other common foods. The levels of fluoride found in these foods is lower, and also is healthier since it’s from CaF (calcium fluoride) instead of HFSA or NaF (sodium fluoride).

If you care about your teeth, your bones, and your overall wellness, stay away from tap water. Fluoride can cause serious health problems over the course of your life, and it is possible to avoid much of it.

Blotting : A Natural Cure for Gum Disease
Water Fluoridation
Smile, it’s good for you!
So, what’s that tooth?
Why Should We Drink More Water?
Why fluoride is bad for you
0 replies